I first heard of the small Romanian town of Brasov from a friend who had spent the best part of six months there in 1967 working on a film about Trajan. Called Columna it was financed by the Romanian government and featured a panoply of European and Romanian actors.  It was made at that moment in Romanian history when Nicolae Ceaușescu had only been in power for two years and had not yet become the self styled monstrous Geniul din Carpați or genius of the Carpathians. My friend talked of this small town in Transylvania as a magical lost place. A Romanian Grand Meaulnes full of beautiful sights and generous people. She recalled that it might have been mutton stew every night but the front doors were always open and the church bells rang throughout the day.

Brasov is still a city full of romantic legends. An elegant small town with a distinct Hapsburgian flavour complete with onion dome churches and beautiful two storey stucco houses in a variety of ice cream shades. It is a glimpse of a forgotten past and a lost Europe. The Europe of Buddenbrooks and Sandor Marai. Small lanes that you get lost in, tiny alleys between buildings that you need to hold your breath in to pass through in order to get to glorious small squares and parks on the other side. Brasov is also surrounded by the spectacular Carpathian mountains. In no time at all one can escape into a rich verdant landscape that has not changed since the Dacians roamed those very mountains fighting the aforementioned Trajan. Indeed the very name of the town is writ large on one of the mountains like the famous gleaming white Hollywood sign. In fact one of the many local legends has it that the Los Angelinos got the idea in 1923 for the original Hollywoodland sign from Brasov and not the other way round. 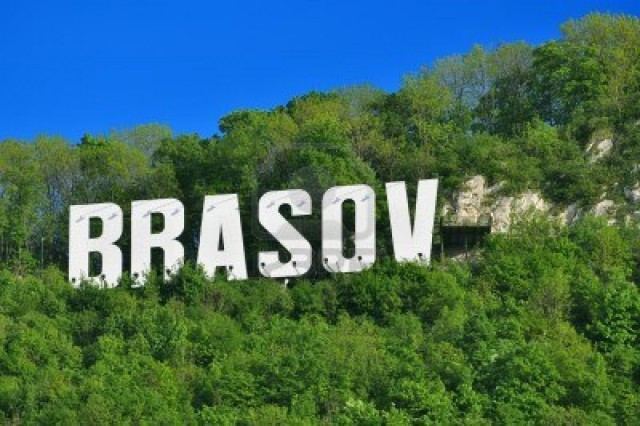 Another peculiar feature of the town is that it has two other names besides Brasov – the Hungarian Brasso and the German Kronstadt. Brasso is from when the kings of Hungary settled there in the early 12th century and it became one of the seven fortresses of the Carpathians. The German name for Transylvania is Siebenburger – seven towns. One does not hear much Magyar in Brasso now although the odd shop sign still exists if you look hard enough but you certainly hear German of the Austrian variety in the churches and cafes and more often than not it is the language of choice. Extraordinary really as the Brasov Saxons have had little contact with their German relations for over eight centuries. Kronstadt was the name given the town by original Brasov Saxons from its Latin name of Corona. They are supposed to be the children of Hamelin who were led away to the mountains by the dastardly Pied Piper. They emerged from their underground travels into the centre of Brasov.

Brasov is the perfect city for a festival of young musicians

Characterised by a love of music and a polyglot atmosphere Brasov is the perfect city for a festival of young musicians coming together to play the much loved works of the great Romanian composer George Enescu who died sixty years ago this year. Like the Columna actors of 1967 the musicians of 2015 were from all over Europe – Great Britain, Spain, Italy, Ireland, Germany, France, Ukraine, Russia and Romania. Most of them had met studying in London or even earlier at the Yehudi Menuhin School. An appropriate school as Menuhin was Enescu’s favourite pupil and in many ways his spiritual son. The young musicians were re-united in Brasov thanks to their devotion to their friend and the festival director Vlad Maistorovici. Most said that they had agreed to come to Brasov because they simply missed playing together on a regular basis as they had done throughout their school and university years.

What is important in art, is to vibrate yourself and to make others vibrate

Violinist and composer Maistorovici founded the festival with his life partner the pianist Diana Ionescu. Brasov seemed like the ideal choice as it offered a perfect backdrop to an ambitious and original festival held from 7th to 14th June, 2015. They decided to call it Vibrate Festival from the Enescu quote “What is important in art, is to vibrate yourself and to make others vibrate.”  A somewhat unfortunate name in English that apparently sounds better in the original Romanian. The festival was primarily a celebration of Enescu’s chamber music but also with works by other composers who had inspired Enescu or influenced him. There were a few works by composers who were inspired by Enescu including Arvo Part. It was a fitting tribute and ended with a concert on June 15th in Bucharest at the opulent Enescu Museum. The museum is the Bucharest Palace of the Cantacuzene family and looks a bit like a rather grand hotel on the Promenade des Anglais in Nice. All elaborate art nouveau nymphs and imposing lions with flashing eyes. Enescu stayed there with his wife Maruca Cantacuzene but could not bear the heavy grandeur of the palace and actually lived in a simple dacha like house in the back garden with not a garland or feline in sight.

Patrick Leigh Fermor visited Brasov on his famous walk in the mid 1930s from London to Istanbul. He said of the small town that after the famous Black Church which is still exhibits a world class collection of Ottoman carpets and the Piața Sfatului  or market place ‘it was the bars and backstreets that drew one most.’ This is as true in 2015 as it was in 1934. Maistorovici and Ionescu live part of the year in Brasov and are aware of the charm of the place. Their original idea had been to literally invade the town with music and to choose all sorts of unexpected venues for their festival in those very back streets. It was a total onslaught on the sleepy town. Almost all the concerts were free and open to all. They were held in baroque churches, a famous high school, a house museum, a Bohemian cafe, a weavers’ bastion, the synagogue and the brand new university hall. Each concert had a different feel and character from intimate to ornate, from imposing to professorial, from groovy to classic.

The grooviest show must have been Classical Club Night with DJ Prokofiev at the Bistro de L’Arte off Enescu Square. DJ Prokofiev is Gabriel Prokofiev and is the grandson of the Russian composer. He presided over a fiendish performance of his work Cello Multitrack with the British cellist Ashok Klouda playing against himself recorded earlier that day and another cellist who had been recorded in London. Quite extraordinary and draining for all concerned in the very complexity and intricacy of the music. Even the sheet music was exhausting to behold. The gilded youth of Brasov did not quite know what had hit them. Ashok Klouda played what for me was the highlight of the festival with the Spanish cellist Pau Codina and the Romanian organist Steffen Schlandt. Enescu’s Adagio Religioso for organ and two cellos is a work of such astounding beauty and simplicity that the vast auditorium of the Aula University was suddenly transformed into a small parish church on a quiet winter Sunday. The piece was played with such finesse and heart stopping sensitivity by all three musicians that if ever there was any doubt that Enescu is a major composer this exquisite piece silenced it once and for all.

The most satisfying concerts at the Vibrate Festival were the site specific ones that managed to combine a sense of community with an excellence in music. String Theory was played at the Neological Synagogue and featured works by Ysaye, Sergei Prokofiev and the wonderful Souvenir de Florence by Tchaikovsky. It was an imaginative exploration into the diversity and delight created by string players  at the very start of their careers. New Vibes was held at the Muresenilor House Museum overlooking the Main Square. A fabulous apartment full of heavily striped wallpaper mixed with local Biedermeyer furniture and French 18th century bergere chairs. Gilded chandeliers and porcelain stoves. Paintings of ancestors and photographs of Brasov through the ages. The house was the home of the Mureşianu family who were writers and scholars and who also published the Gazeta Transilvaniei. The concert featured the Russian violinist Valeriy Sokolov and his Ukranian pianist Mikhail Sporov. It was like being taken back in time and accepting an invitation to a musical soiree in the home of a famous poet. The audience had dressed up for the occasion including two little girls in white organdie dresses and pink velvet hair ribbons.

A Musical Promenade was at the Weavers’ Bastion – a unique structure dating from the fifteenth century. Nestled in the foothills of the Carpathians with the smells of the pine woods and meadows infiltrating the stillness of an early summer night.  We were treated to a spirited performance of the Bach Cello Suite No 1 by the very talented Pau Codina followed by the Enescu Octet. The musicians had practised in the medieval tower of the agricultural faculty of the university until 2 in the morning to get it right. Eight young musicians attacking a piece known for its difficulty – the Octet has the same reputation for difficulty amongst string players as the Rachmaninov Third Piano Concerto has for pianists. Ruth Gibson, Natalie Klouda, Valeriy Sokolov, Franceso Sica, Claude Frochaux Daniel Palmizio and Pau Codina played perfectly under the watchful bow of Vlad Maistorovici. It was  a triumph. They also played another wonderful octet by Mendelssohn in the Church of St Peter and St Paul earlier on the festival…both are recorded in rehearsal below.

Perhaps the fitting place to end is the Music for Adolescents concert held during school hours at the famed Saguna High School. It was a brave and vigourous event that gave the young of Brasov a taste of the thrill of music. It was an inspiring afternoon spent in the 18th century panelled classroom of this wonderful building with teachers, parents and pupils all enthralled to the music of Dvorak, Shostakovich and Mahler. It may have a silly name but the Vibrate Festival certainly made us vibrate to the possibilities and delights of classical music in many wonderful settings in a town with three names and many legends.

Henrietta Foster is a freelance television director and writer. She works mainly for the BBC and has just completed a documentary on women orchestra conductors. She is also writing a book on Hungarian Jews.