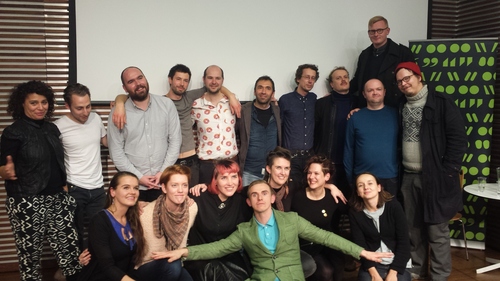 Nearly two dozen poets from across the continent presented brand new collaborations in the literary and avant-garde traditions to a sold out audience of nearly 100 at Free Word Centre. British poets wrote these works with visiting writers from Slovakia, Finland, Iceland, Lithuania, Austria, Hungary, Norway and more, firmly rooted in 21st century poetic practise, in one of London’s hubs for modern literature.

Steven Fowler, founder of The Enemies Project and the organiser of the event, reflects on the night and the value of European collaboration in arts and poetry:

‘All but 2 pairs had never met each other before the night itself.

From the 18 poets participating, travelling in from 12 nations across the continent, virtually none had established friendships. Yet, by the end of the night, a night that went on long after I went home, it was clear that a community had been made and relationships which would last years had begun.

I can’t emphasise enough how the collaborative creative act and the diffusion of energy away from the singular, representative, pre-written poetry, creates closeness and community and energy and openness. Quite amazing to witness on this night, almost the perfect evidence for what I spend quite a lot of my time talking about, theorising behind the Enemies project.

The most gratifying thing was the poets themselves feeling they had had a generous and memorable experience, one where they were treated with hospitality and due respect. For me it was a great privilege to see so many friends,  Christodoulos Makris, Gabriele Labanauskaite, Christoph Szalay, Valgerður Þóroddsdóttir, Ville Hytonen and co, whom I had only known before in their countries, or during a festival. And to meet so many new poets.

Every collaboration was distinct and dynamic in it’s own way and many remarked it was the best Camarade they’d been to.

All the videos are here: http://www.theenemiesproject.com/europeancamarade

And working with Endre Ruset, a friend for many years now, was wonderful. We had written a poem with ascending lines corresponding to the Fibonacci sequence, and then planted lines with other poets in the audience, so as our collaboration grew in number, so the number of voices would multiply too, and become intermittently choral.

It capped a great run for me with events and performances, each one has been a special experience and motivating to keep on, keep curating and creating together. And keep travelling, extending reach and asking poets from all over the world to visit us in London.’

The event was introduced by Rosie Goldsmith of the European Literature Network.

The Camarade series explores collaboration exclusively between poets, taking the form of events which pair writers to produce and premiere new collaborative poems or artworks, to be performed live.  The European Camarade will pair European poets from outside of the UK with British counterparts, featuring some of the most dynamic poets & textual artists working across the contemporary European scene, this event will evidence the cross continental dialogue so prevalent in the avant-garde and literary scene.