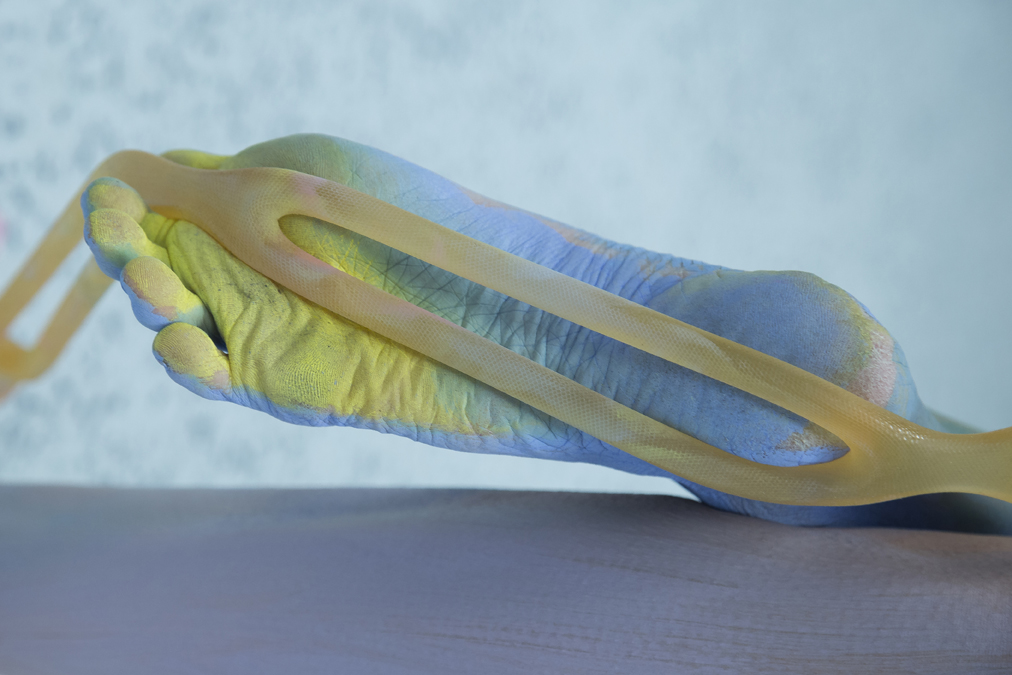 For their new exhibition, Czech artists Miroslava Večeřová and Pavel Příkaský transform the gallery space of Czech Centre London into a stage that is simultaneously both, an art installation and a site of performance. With the title of the exhibition referring to the capacity of a sign, image or word to have more than one meaning, this latest collaboration presents a creative dialogue of the artists through combinations of painting, performance, video and site specific installation. Curated by Ben Roberts.

Adopting the visual language and commercial tropes of high street medical providers, the Polysemy installation takes its form from a new collaborative video work, Inner Monologue (2016), which was shot partly within a doctor’s surgery.  The installation weaves together large scale, microscopic photographic images with sculptural interventions in the gallery space, abstract painting with video work and perhaps most mysteriously a huge image of a woman about to undertake an MRI scan.

London-based Večeřová and Prague-based Příkaský seek to blur the lines between their disciplines placing work within one another, layering connections and conversations. Throughout these interactions the artists consistently steer a course between figuration and abstraction, the narrative and the incidental giving their collaborations the space in which to speak. In expanding this language, Polysemy becomes eponymous – an exhibition which becomes more than the sum of its parts, activated and articulated equally by viewer, performer and artist. In exploiting the potential of ambiguity in this way, disrupting visual expectation the show becomes a space to reconsider the narratives constructed around us.

Pavel Příkaský (b.1985)
Pavel studied painting at the Academy of Fine Arts in Prague in Vladimir Kokolia´s studio. He currently Lives and works in Prague. He mainly uses the medium of painting, which he blurs and obscures its boundaries using specific installation strategies, sculptural interventions and small steps from flat image to spatial object.
Miroslava Večeřová (b.1985)
Miroslava studied photography at the University of the Arts in London and later at Prague´s Academy of Art, Architecture and Design (Hynek Alt´s and Aleksandra Vajd´s studio). She lives and works in both Prague and London. Whilst still a student Miroslava Večeřová captured attention with her video in which she interrupts a long static shot with an unexpected physical gesture. Both images thus started to express not only something about each other but also about the material essence of something that, thanks to advances in digital technology, we have come to consider as intangible. Her more recent photographs and videos specifically deal with natural material, corporeality, and physical contact with the surface.