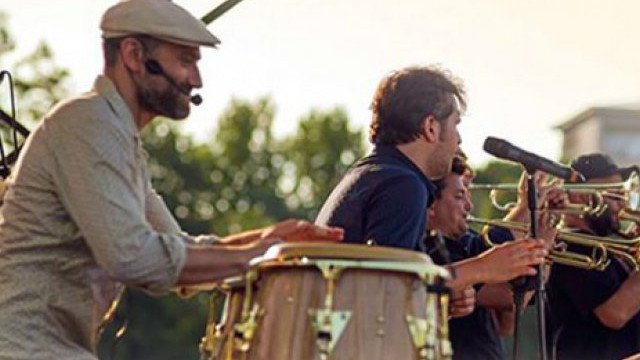 The Bulgarian Cultural Institute in London has the pleasure to present to you an online musical performance by Kalin Velov, TUMBAITO group and artists Dani Belev and Vincent Petrov.

Dance lesson – The Golden Bulgarian hits from the ’60s and ’70s.

A musical performance in which the wonderful Bulgarian hit music from the 60s and 70s is presented in Latin versions and performed by the best Bulgarian Latin band – Tumbaito. The idea for this new show is to combine music with theatre, dance and stand-up comedy.

The album “Golden Bulgarian hits from the ’60s and ’70s” includes many interesting and fun in its lyrical and musical content popular songs from the rise of Bulgarian pop and popular music. Each of these songs has a story, and most of them have humorous elements – both in music and lyrics.

The play “PERFORMANCE OF KALIN VELYOV AND TUMBAITO” is presented at the Park Theater “Borisova Gradina” with the support of Sofia Municipality.

Be sure to share your impressions and comments below the video so we can continue broadcasting our new online projects.

The video can be viewed on the Youtube channel and the Facebook page of BCI London until 22:00 on Friday, July 2.