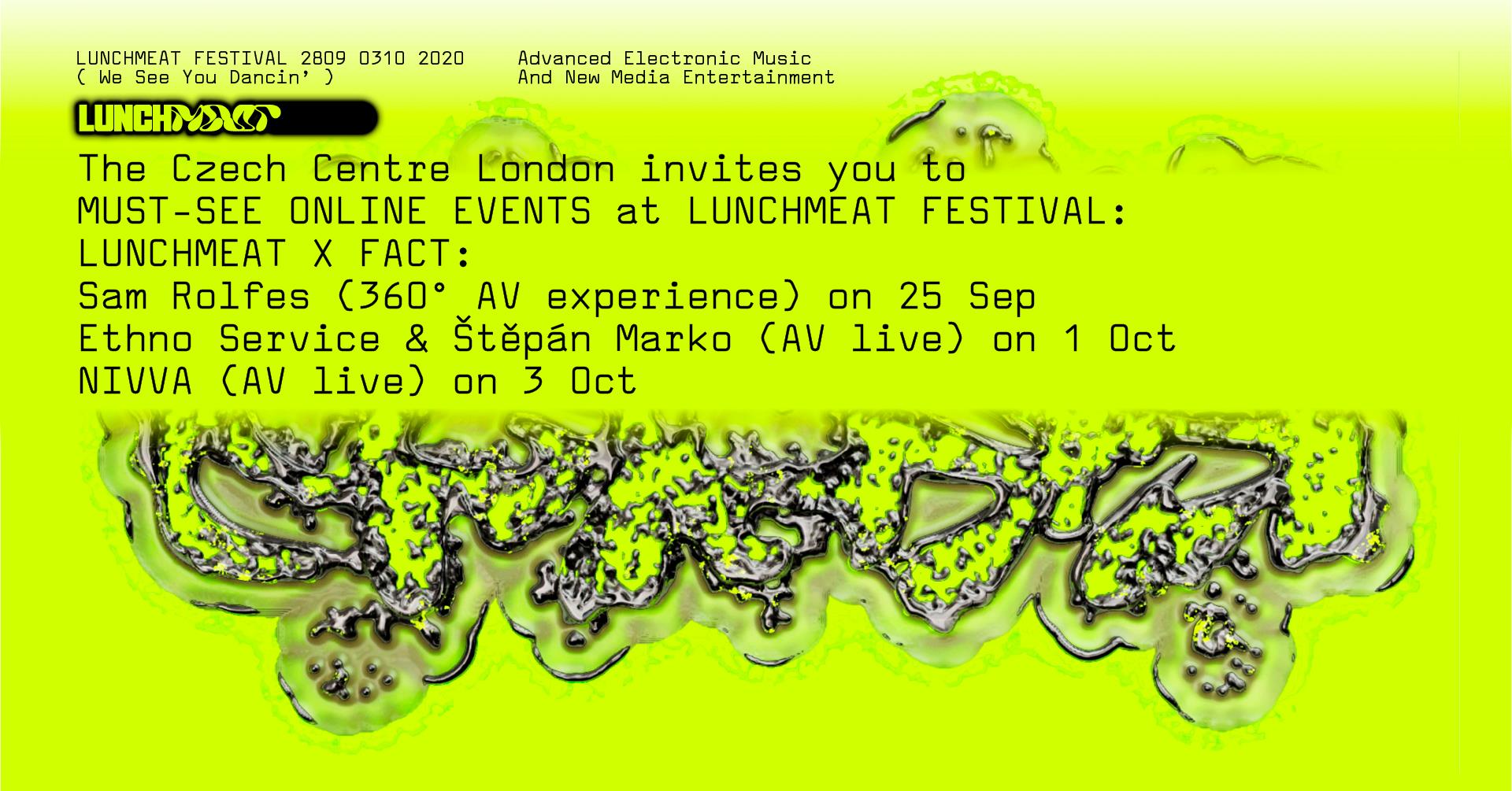 Lunchmeat Festival and Fact Magazine join forces for an online event with acclaimed digital artist and director Sam Rolfes. The online performance is an audiovisual “tour de force” through his exceptional and extravagant mutant visual style, which you’ll recognise from unmistakeable video and still image projects for artists including Amnesia Scanner, Danny L Harle and Caroline Polachek.
Thanks to the grant given by the Ministry of Culture of the Czech Republic,, everyone can enjoy 360° AV experience FOR FREE. The result of Sam Rolfes’s residency Fact Magazine, a bizarre 360˚ online video can be seen with cardboard VR glasses or a VR headset.

Sam Rolfes is a Chicago and New York based mixed-format digital artist and director who has been called “L’Enfant terrible of digital arts” by Clot Magazine. He uses the human body as a mark making device and underlying structure, crafting diffusive psychosexual worlds that sublimate space and identity. His work examines the mutability and malleability of flesh, incorporating surreal performances through the lens of contemporary portraiture. He has worked with Danny Brown, Rihanna and Squarepusher, as well as making live 3D visuals for Evian Christ, Mumdance, Lightning Bolt, and Teengirl Fantasy.

If you like techno tinted with a dubby atmosphere then look no further. Tracks by Ethno Service are filled with thrill, suspense and trippy haze, which create an amazing cinematic ambience. Despite their name, ES is not an ethno music cliché. It is proper heavyweight percussive dub from the jungle – where Mowgli would piss his pants and run away screaming – places with decent opium and streets with no name.

For the very first time Ethno Service will be accompanied by their own distinctive visuals, which develops their language even further. At the beginning there was the Dusk. The Dusk was a Haze. The Haze was a Sound. That was the beginning. Moments of strobe light, dripping from the ceiling. Over time, the first clusters of Latin information wrapped in Sanskrit robes began to form from Arabic numerals. With six-sided pressure, it first liquefied and later solidified. The primitive Artifact. There was a delicate movement on the temple floor. The small fossil card slowly slides toward the altar. Pure energy flows through the sonically engraved lettering. Ethno Service, at your service.

Virtual musician or digital being? Or both? NIVVA is a music/an artwork from Prague, Czech Republic. What sets it apart from other music bands is that the main face of this project is a digital avatar. NIVVA’s debut EP, called EASY, was released by Czech record label Bad Names (Margo, Sundays on Clarendon Road) in February 2020.

Four minimalist electronic songs on Easy EP tell stories of exploring the limits of intimacy and what happens when a digital avatar breaks the character. The upcoming work talks about the future of artificial intelligence and how the algorithms that surround us on a daily basis affect our lives. NIVVA hasn’t performed live yet, Lunchmeat festival helps with the premiere of her first audiovisual show.

Lunchmeat Festival is an annual international festival dedicated to advanced electronic music and new media art based in Prague, Czech Republic. Since 2010, it brings carefully selected creators from different art spheres together on one stage, creating a truly synesthetic experience.