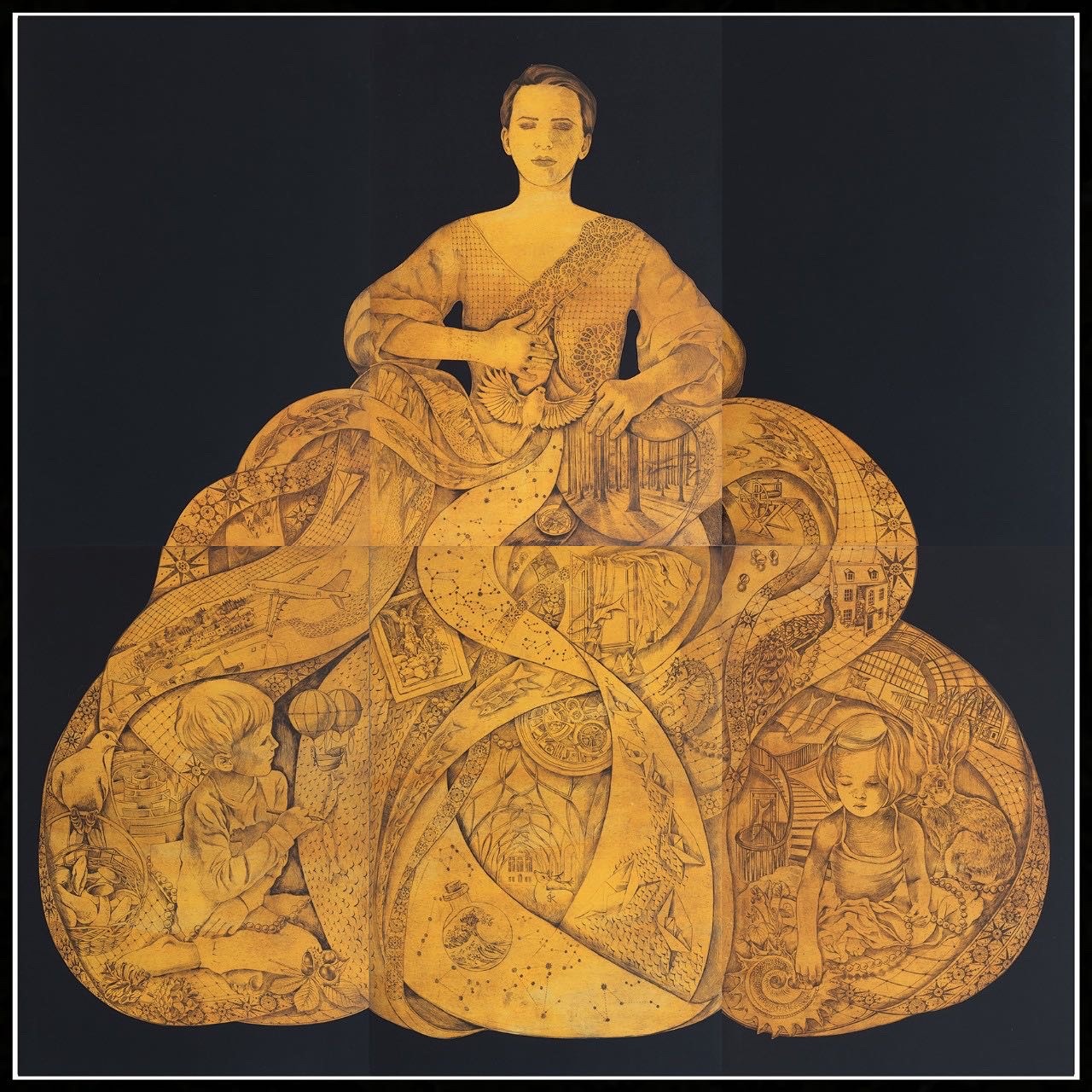 A mid-career retrospective of Czech-born artist Míla Fürstová’s best known for creating art for Coldplay’s best-selling album Ghost Stories will open at the Czech Centre’s Vitrínka Gallery on 17th March 2022. The exhibition charts the course from Míla’s graduation from the Royal Collage of Art, to her becoming the youngest ever elected Academician at the Royal West of Academy in Bristol, being collected by the V&A and Her Majesty the Queen, to her commission by Coldplay and finally the creation of “All the Rivers That Flow Through Me”, which was selected from ten thousand artworks to represent the Summer Exhibition online by the Royal Academy of Arts.

Míla Fürstová’s works are an intimate portrayal of the human soul explored through the medium of etching, expressed in a distinctly female voice.

Open hours:
Tuesday – Friday
10 am – 5 pm
or other times by appointment at info@czechcentre.org.uk

A new golden version of the two wings in the shape of a broken heart, Míla’s art for Coldplay’s world-wide number one album Ghost Stories will be presented at a charity event at the Czech Centre in May as well as a digital screen featuring the forty minute animation that Coldplay made of Míla’s art.

Also included in the exhibition are works from Míla’s graduation at the Royal College of Art, a work also in the collection of the V&A, Her Majesty the Queen, the Czech Republic’s first democratic President, Václav Havel and selected works from Míla’s commissions by Coldplay and for the British covers of the New York Times Best Selling series Mortal Instruments.

In the Czech Centre window, looking out onto Notting Hill’s busiest road by Kensington Palace Gardens, will be Míla’s“All the Rivers That Flow Through Me”, a six panel etching which was handpicked by Grayson Perry for central display at the Royal Academy’s Summer Exhibition, and then selected as the one image from over ten thousand entries, to represent the show online.

Another relevant series to be exhibited in Míla’s Czech Centre retrospective, is “Motherhood”, a series which playfully deals with the joys and difficulties of being a parent as well as a professional artist. In one of the works from this series, the artist depicts herself contorted into a yoga pose to protect and cradle her son whilst following her calling of being an artist. This series was produced by Míla after the birth of her second child, Viola, who was delivered just hours after Míla made the finishing touches to Coldplay’s final single, “True Love”, a work which also will be on display and a term that sums up her dedication to her craft.

Míla Fürstová is an award winning internationally exhibited artist, who has shown in 20 solo shows in many countries including Britain, USA, France and the Czech Republic over the last decade. During this time she has won 14 prestigious awards. Her work has become part of important private and public collections, including that of Queen Elizabeth II and the V&A Museum in London and has featured in numerous publications.

Born in Czechoslovakia, Míla gained an MA degree in Art, English Language and Psychology at the Charles University in Prague, whilst simultaneously studying for her BA degree in Fine Art Printmaking at the University of Gloucestershire.

In 2001, Míla Fürstová received her Master’s degree at the Royal College of Art and has subsequently lectured at Coventry University and The University of Gloucestershire.

In 2003, Míla was appointed the first Artist in Residence at the Cheltenham Ladies’ College, where she founded and ran an Etching studio till 2010.

In 2009, Míla Fürstová became the youngest ever elected Academician at the Royal West of Academy in Bristol.

In 2014, Míla’s work reached over 400 million people when she was commissioned to make the artwork for the Coldplay Ghost Stories album and 4 singles.

Organised by the Czech Centre and Míla’s long time art dealer, Fraser Scott of A Gallery