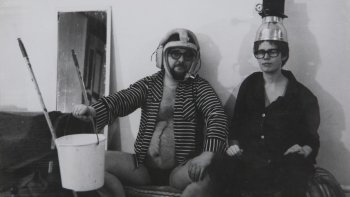 The Czech Centre London is pleased to announce the UK premieres of The Vasulka Effect and Frem at Sheffield Doc/Fest 2020.

Artists Steina and Woody Vasulka met in Prague in the early sixties, before moving to New York where they discovered video and later founded the legendary gallery, Kitchen. In the film, the couple are now reaching retirement age, living in Santa Fe. Their entire life has been dedicated to art, as pioneers in music, waves, collage, and landscapes. As lifetime hackers and known as the “grandparents of video art”, their experiments can now be seen as having had a huge impact on a generation of digital artists. With Woody having sadly passed away in December 2019, now more than ever their work deserves to be rediscovered.

For industry passholders: available on Doc/Player
For all: Watch on Sheffield Doc Fest Selects (£4.50)

A reaction to the wave of post-humanist thinking caused by the development of technology and artificial intelligence and the climate crisis. The human species is beginning to realize its insignificance and transience, human identity has found itself in a crisis. This film attempts to reflect this feeling, creating a dehumanized and alienated view of landscape and nature beyond human perception. Incomplete thoughts and fragments of dialogue, music interrupted by rushes and glitches, and the seemingly confused, unanchored camera, foster a disturbing reflection on the limits of anthropocentric thinking.

Available to watch in the cinema or Sheffield Doc/Fest Selects in the Autumn.